It was a Sunday of inspiration, of joy, of tears and recognition. Great friends joined me, as we laughed, cheered and cried over breakfast at our own celebratory table. I didn’t know what to expect when last week my husband Michael told me that he would be receiving USATF-LI’s Athlete of the Year Award –Race walk Division and there would be a four-hour breakfast meeting at Hofstra University for the ceremony.  I was humbled when my friends took time out of their Sunday schedule to be there and left glowing, so happy to be a part of an amazing active community.

There were coaches who were recognized for their dedication and passion, some who admitted to missing their families while supporting their track athletes.  There was one coach who said he taught five biology classes, track and showed up for weekend meets along with owning a summer track and field camp. He said there were vacations sacrificed in order to support their athletes. But the smiles on their faces told the story, seeing the growth of a child athlete meant the world to them

There were athletes at every age, from 11- 91, called to the podium and posed for the camera. Blood, sweat and tears went into achieving their name on that plaque, as they held it dearly and thanked people in the audience who helped them become great.

Tears came down many eyes when one coach talked about another local school track coach and how she paid for equipment, shoes and uniforms out of her own pocket. The school has zero budget for track and field, but that didn’t stop her from recognizing the importance of being a great role model and paving the way for those children to have a chance to experience self worth.

The multi-emotional morning made me jumpy and I got out of my seat several times in anticipation of Michael approaching the podium.  There was an Olympian who racked up so many awards she barely stood up straight holding them all. There was an 11-year girl who lit up the room with her smile and her aura of greatness. There was a young boy with autism who stole our hearts as he thanked the audience and proved that special needs does not stop someone from competing at its best.

Finally the time came to acknowledge Michael for his greatness in 2012 as a Race walker. Marianne the Chairman of USATF-LI Race walking introduced him mentioning his past accolades as well as his new fun pastimes of trail running, snowshoeing, being a Polar Bear and for getting out there having fun doing it. Our table rose and cheered as I was photographer on duty this time around, hoping that I could for just this one time capture the moment that he does so many times for us. I think I did ok. 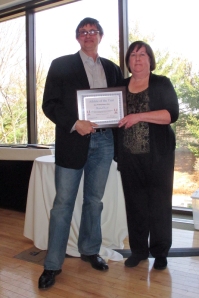 Michael Gets Athlete of the Year- Race Walking

Alex, the host for the day, got everyone digging into their bags and pockets when he announced it was time for the 50/50 raffle. He read one number then another then he said, “is everyone still with me?” Palms were sweating, eyes were focused on rows of blue tickets and he dragged it out as if it were the final episode of American Idol. The last number was called and my friend David popped out of his chair with the golden ticket in hand rose high to the sky. I began to yell, “David won, David won”. My table was in awe as he gracefully walked up to the podium and was awarded a handful of cash. With a smile from ear to ear, he thanked Alex, gave a nod to the audience, came back to the table and said, “ I can’t accept this”. My head tweaked, I said “what?” David continued to shake his head “no” while he explained to the table…”how could I accept this, when a local LI track coach here is taking money out of her own pocket to fund programs.” Within minutes, the message got to Alex and David was called up to the podium.  David gave back the money as he said to the audience, directed to the USATF-LI and to the local schools in need… “This is all for you for what you do”. 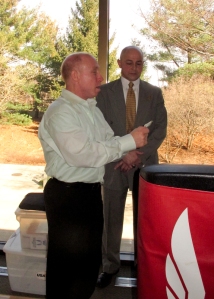 It was a day that I will never forget.